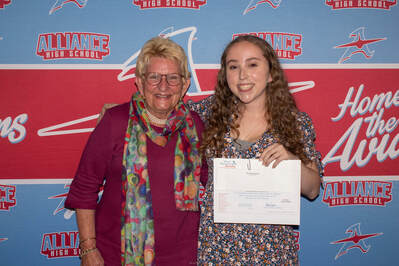 Sarah Morris Brown '61 and Caroline Denny, 2022 Recipient
In 2021, the Wilson Foundation award has been revised. Future awards will be a non-renewable $10,000 Scholarship to be presented to an Alliance High School graduating senior. The recipient may select any four year university as they follow their career dreams.

Gary L Wilson ’58 will donate this scholarship, through The Wilson Foundation, in order to give Alliance students a wonderful opportunity that may otherwise be above their means and out of their consideration.

The AHS Foundation Scholarship Committee will select the recipient, in consultation with the AHS Guidance Office.

We appreciate Mr. Wilson’s generosity toward Alliance High graduates. The AHS Foundation will strive to continue to deserve Mr. Wilson’s and the Wilson Foundation’s confidence in delegating us this responsibility. 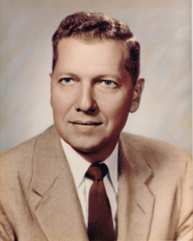 ​The Elvin J. Wilson – Duke University Scholarship was established in 1998 by Gary L. Wilson in memory of his father, who was a local, well-known business man and civic leader.  He served as a councilman-at-large for multiple terms on Alliance City Council.  Elvin and his wife Fern valued education greatly and encouraged their two sons to attend the best universities they could.  Gary graduated from Alliance High School near the top of his class in 1958.  He earned a football scholarship to Duke University for his successful playing years at AHS under legendary coach Mel Knowlton, who he credits with preparing him for athletics at a higher level.

​Remembering his home town roots, Gary credits his parents, the late Elvin Wilson ’35, and Fern Donaldson Wilson White ’38, for providing a stable environment, integrity and a moral background that allowed him to grow.  He also credits his football coach, the late Mel Knowlton, who taught him discipline and the late John Bentia, former Alliance Manufacturing President where Gary worked summers, who he emulated, in part, by reading the same books. 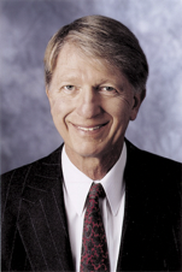 Gary L. Wilson is an American business executive. He served as chairman of the board of Northwest Airlines, chief financial officer of Walt Disney Company and chief financial officer of Marriott Corporation.
Gary Wilson, a native of Alliance, Ohio, graduated from Alliance High School in 1958, and was awarded a football scholarship at Duke University.  He played as a running back on the team that won the Cotton Bowl in 1960.  Wilson earned a bachelor's degree from Duke in 1962, and an MBA from the Wharton School of Finance and Commerce at the University of Pennsylvania in 1963. He received an Honorary Doctor of Laws degree from Pepperdine University in 2005.

Wilson began his career in 1964 in Manila as CFO of Trans-Philippines Investment Corp. (TPIC), a leveraged buyout of one of the world's largest sugar companies. After returning from Asia, he joined Marriott in 1974, as executive vice president for finance, strategy and development. In 1985, Wilson joined the Walt Disney Company as executive vice president of finance, strategy and development.

He led the buyout of Northwest Airlines in 1989. He served as co-chairman then chairman of Northwest from 1991 to 2007.

He is trustee emeritus of Duke University and serves on the board of overseers of the Keck School of Medicine at the University of Southern California.  He previously served on the boards of directors of Northwest Airlines, Inc., The Walt Disney Company and Yahoo! Inc.