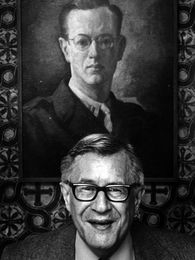 Walter I. Farmer as he appeared in world War II and in 1979. (source: usatoday.com)

Following graduation from Alliance High School in 1930, Mr. Farmer entered Columbia University in New York City.  After attending the University of Colorado during the summer of 1931, he entered Miami University in Oxford, Ohio where he earned a Bachelor of Arts degree and a Bachelor of Architecture degree.  From 1935 to 1942 Mr. Farmer worked as a designer for A.B. Closson Jr. Company of Cincinnati, Ohio.

From 1942 to 1946 Mr. Farmer served in the U.S. Army achieving the rank of Major.  He served as Commissioner for the Protection and Salvage of Artistic and Historic Monuments in war torn areas.  He is currently involved in the filming of a documentary feature for German television about the work of his commission. 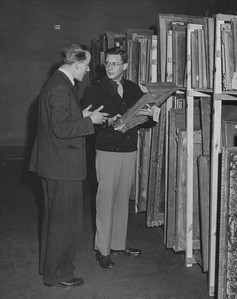 Captain Walter Farmer during the aftermath of World War II. (source: nga.gov)
In 1946 Mr. Farmer took the position of Director of the Interior Decorating Department for Foley’s Federated Department Store of Houston where he remained until 1950.    From 1950 to present he is the Senior Designer and Owner of Greenwich House Interiors in Cincinnati, Ohio

In 1987 Mr. Farmer authored In America Since 1607 – a study of Early American Quakers.  Presently he is working on a book on America’s part in protecting Germany’s Arts and Monuments.

Mr. Farmer has lectured and taught at the Columbus Art Museum, Dayton Art Museum, Cincinnati Art Museum and the University of Cincinnati.  He is the founder of the Contemporary Arts Museum in Houston, Texas, and the Walter I. Farmer Museum at Miami University.  He is currently involved in the filming of a documentary feature for German television about the work of his commission. 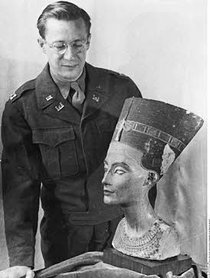 Captain Walter Farmer beside a 3,300 year old limestone bust of Egyptian Queen Nefertiti. (source:fr-online.de)
​
​​Biographical update: In 1996 he was awarded the German Commander’s Cross of the Order of Merit for the part he played in returning art objects to Germany and the German people.  Walter Farmer passed away in 1997 in Cincinnati.

The 2014 movie The Monuments Men based on the non-fiction book by the same title written by Robert Edsel brought significant notoriety to the part that Walter Farmer and others like him played at the end of World War II in restoring thousands of works of art to their rightful owners.