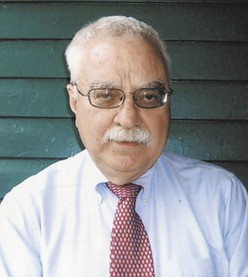 Robert Hunter, Jr. is a 1964 graduate of Alliance High School who still resides in Alliance, Ohio.  He is an attorney with Hunter and Hunter, also located in Alliance.  Mr. Hunter graduated from the University of Cincinnati in 1969 with a B.S. in Civil Engineering.  He received his Juris Doctorate degree in 1975 from Georgetown University.

Mr. Hunter initially worked as an engineer for the Ohio Department of Transportation prior to obtaining his law degree.  Since then he has worked with Congressman Ralph Regula, served as an attorney for the Environmental Protection Agency, and as a business law instructor at Mount Union College.   He is currently the Assistant Law director for the City of Alliance in addition to maintaining a private law practice.  As a local attorney he has provided countless hours of pro bono services to many local organizations. 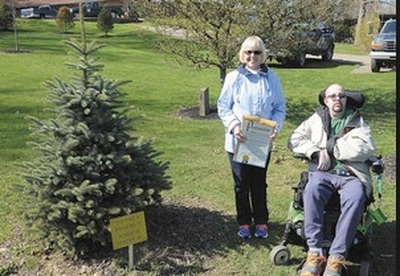 Bob Hunter's spouse Mary Beth and stepson Kyle Kocher at a tree planting in Silver Park honoring Bob's many contributions to the community. (Photo courtesy of the Alliance Review.)
In July of 1980, Mr. Hunter had the foresight to create the Friends of the Park, Inc., a non-profit organization whose mission is to support the Alliance Parks department.  Since its inception, Friends of the Park has acquired significant funding to advance park facilities and programs for the benefit of area residents.  Additionally, he has been an active supporter of the Alliance Shade Tree Commission.

Mr. Hunter is married to Mary Beth Kocher Hunter and they have two sons, Kyle Kocher and Jeffery Hunter.
​