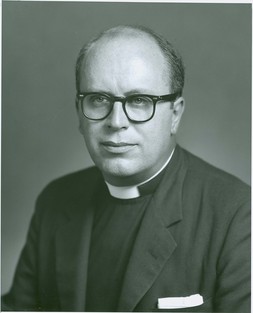 Rev. Joseph D. Huntley was selected for his outstanding Christian leadership with young people in two of the country’s greatest cities – Chicago and New York.  Following his graduation from Heidelberg College, he received his Bachelor of Divinity degree from Lancaster Theological Seminary in Lancaster, Pennsylvania. Between degrees he served in the U.S. Army during World War II.

In 1961, Rev. Huntley was appointed to the staff of the Seamen’s Church Institute of New York as the Director of the Merchant Marine School and the Joseph Conrad Library.  He was responsible for the coordination of all educational activities at the Institute. 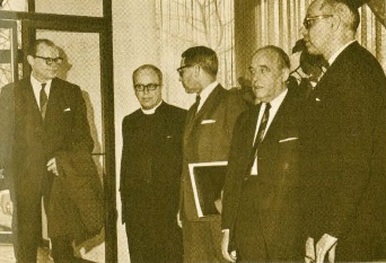 Rev. Joseph Huntley (2nd from left) giving Swedish government officials, with merchant marine responsibilities, a tour of the SCI in 1969. (source Seamen's Church Institute digital files)
The Seamen’s Church Institute (SCI) is the largest center for seamen in the world.  Founded in 1834 and affiliated with the Episcopal Church, SCI serves mariners through education, pastoral care and legal advocacy.  Headquartered in New York City, SCI operates centers at ports in Newark, New Jersey and Oakland California.  It also has education facilities in Paducah, Kentucky and Houston, Texas.

Rev. Huntley received the Crossroads Award in 1958 and the Church and Community Award in 1960.  He has appeared on major radio and television networks and was a frequent contributor to the Saturday Review and the New York Times.

Rev. Joseph Huntley passed away in 1969.  He is buried with his parents and a brother in Mount Union Cemetery in Alliance.  Following his death, the Director of SCI, in his annual report, described Rev. Huntley as, “one of the finest chaplains ever to serve on this staff.”  The total enrollment in SCI’s educational department during Rev. Huntley’s tenure grew from 208 in 1961 to 525 in 1969.