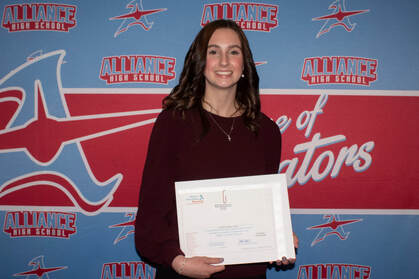 2022 recipient Laci Keppel
The family of Ray Robert and Eva Mae Peters Reighart ’27-Ja/’30 has chosen to establish a scholarship in memory of their parents with an endowment gift of $100,000.00.

Ray Reighart and Eva Mae Peters both taught in the Alliance school system. Mr. Reighart had aspirations of becoming a doctor, but the loss of his savings during the ‘financial crash of 1929’ curtailed his plans.

Eva graduated from Alliance High School in 1930, attended Mount Union College and earned her degree from Kent State University. She taught for five years at South Liberty Elementary School until she and Ray married in 1938. Eva was forced to resign from teaching in Alliance because, at that time, spouses were not permitted to teach in the same school system. She remained active in the community as part of the Hospital Women’s Auxiliary, the Parent-Teachers Association, Alpha Xi Delta Sorority and the Presbyterian Church.

Mr. Reighart graduated from AHS in the January Class of 1927. He graduated from Mount Union and did graduate work at Kent State University. He taught at Alliance High School for his entire career, retiring after nearly thirty-five years in 1967. Mr. Reighart began teaching German and Biology and later taught Biology, General Science and Driver’s Education. He also coached the AHS Golf team and was an advisor to the Science Club. In addition to teaching, he was the golf pro at Sleepy Hollow from 1935 to 1947 and owned and managed the menswear department at the Spring-Holzwarth Store on Main Street.

The AHS Foundation will administer this endowment fund and select the scholarship recipients. We acknowledge the responsibility and appreciate the confidence that the Reighart family has placed with the Foundation.