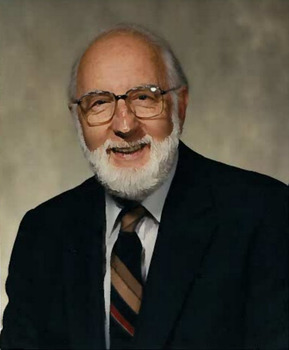 Professor Lyle Martin Crist is a graduate of Purdue University and Indiana University.  He has taught at Alliance High School, Iowa State University and at present is on the faculty of Mount Union College.  At Mount Union he teaches classes in American Literature, Journalism, Creative Writing and Basic Composition.

His education includes an aeronautical degree and a Master’s degree in Journalism.  He has worked in the fields of research, technical writing, freelance writing, public relations, and public speaking.  Professor Crist is one of fewer than 100 speakers nationwide to be awarded the Certified Speaking Professional rating by the National Speakers Association.

Professor Crist, along with his teaching, travels the country presenting programs and workshops to a wide range of audiences.  His presentations include: Isn’t Anybody Reading Anymore, Ain’t They Teaching English No More, Do They Know What You Mean, Legacies of Our Literature, and a seminar on creativity and communication.  He is known for bringing humor to his presentations.

Professor Crist’s published works include a textbook entitled, Man Expressed: The Realm of Writing, 1971; Through the Rain and Rainbow, 1974, a memorable biography of the deaf and blind poet and educator Richard Kinney; and Runaways, 1976, a collection of poems by Professor Crist. 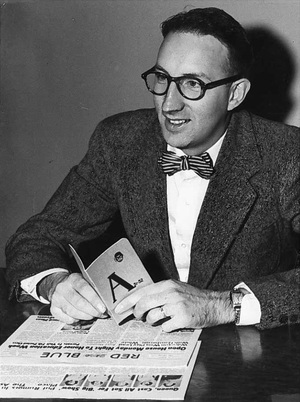 Professor Lyle Crist as an AHS teacher in the early 1950's. Note the Red and Blue school newspaper on his desk.
He is a member of the Society of Professional Journalists, the National Council of Teachers of English, the International Platform Association, and the National Speakers’ Association.  He is also a 33rd degree Mason and served terms on the Alliance Board of Education and the trustee board of the Alliance Historical Society.  In 1967, he was the recipient of the “Great Teacher Award” at Mount Union College.

In 1946, Professor Crist married the former Marilyn Turner, whom he met while they were both attending Purdue University. They have two daughters.

Professor Crist passed away on March 28, 2003.  He was preceded in death by Marilyn, his beloved wife and soul-mate, who passed away on June 15, 1996.  They are buried together in Moultrie Chapel Cemetery in Moultrie, Ohio, south of Homeworth.  They are survived by two daughters, Rachel Crist (Stephen) Nelson of Albuquerque, NM and Jennifer Crist of Alliance and two grandsons.