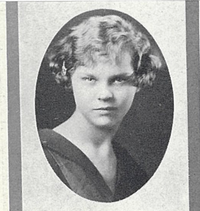 Muriel Lloyd graduated from Alliance High School in 1924 and attended Kent State University. At that time, the requirement to teach K thru 8 was only two years of college, upon which a Lifetime Teaching Certificate was awarded. Muriel was never able to go back to college.
Muriel grew up outside Marlboro, attending school there through the tenth grade. With no high school classes available in that area, she moved in with an aunt, uncle and cousin on West Ely Street in Alliance and finished at AHS. She taught school near Alliance and in West Richfield, Ohio, until she married in 1935, moving first to Michigan and then to Indiana. Muriel moved back to Alliance in the mid 1940’s with her daughter and made a living for them by making and altering clothes. She realized that she needed to earn more money if her daughter was to be able to attend college and took employment as a teacher at Bolton School. When Bolton closed, she taught at the new Lexington School.

The Muriel Lloyd Phillips Music Scholarship is being established by her daughter Mary Phillips Arnett ’60 to honor the memory of her mother.
Mary started at North Lincoln and graduated from Alliance High School as one of three who tied for the title of Valedictorian. She was introduced to the violin at age 11. Mary’s mother said that she never had to remind her to practice. Some of her friends gave her their John Thompson Piano Books and Mary taught herself to play the piano. Her grandparents moved their piano to Mary’s home to help satisfy her love of music. She was an only child, raised solely by her mother. Money was scarce, but with much frugality, and by earning two scholarships, Mary was able to achieve a music degree from Muskingum College, while avoiding any school loans. Muriel stressed academics and responsibility and encouraged her daughter throughout her music studies and career. 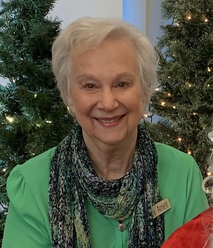 Mary Phillips Arnett '60
Mary taught in the orchestra programs at North Canton, Oakwood and Dayton public schools. She has been a part of the violin section in symphony orchestras in Canton, OH, Louisville, KY, Middletown, OH, and most recently in Dayton, OH, retiring in 2006. She taught violin and viola students privately for forty-five years, mostly in the Dayton area. For twenty years she was a counselor, then director, of a large summer music camp sponsored by the Presbyterian Church. Mary has participated in, and directed, several Handbell Choirs, including one at Bethany Village, a senior living complex south of Dayton, where she currently lives.

This scholarship honors Muriel Lloyd Phillips ‘24 who sacrificed to provide her daughter a lifetime of music. Mary relates that she was inspired to create this scholarship by Ray and Rachel Reighart’s Scholarship gifts in memory of their parents. She hopes that her gift will inspire others.
The Muriel Lloyd Phillips Music Scholarship will be awarded to AHS graduating seniors who have been involved in the music programs offered through Alliance High School and are in need of financial support to continue their education. Special consideration will be afforded to students intending to major in a career in music.
​
The AHS Foundation will administer this Scholarship Fund and select the recipients from the applications received. We appreciate the confidence demonstrated through the assignment of this responsibility.