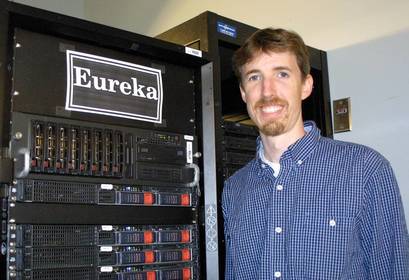 Michael Bowling is a 1993 graduate of Alliance High School presently residing in Edmonton, Alberta, Canada.  He is a Professor in Computing Science at the University of Alberta.  He is currently the leader of the Computer Poker Research Group and the principal investigator for the Reinforcement Learning and Artificial Intelligence group and the Alberta Ingenuity Centre for Machine Learning. 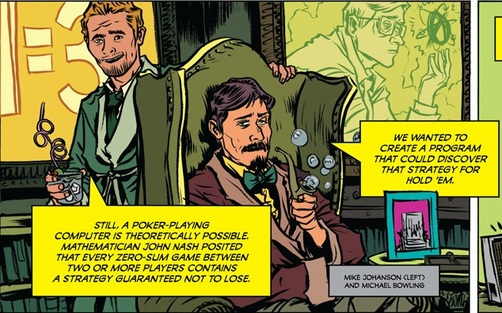 Prof. Michael Bowling and his co-worker Michael Johanson characterized in "Wired" magazine's comic book, "Ante Up, Human; the Adventures of Polaris, the Poker Playing Robot." (source: "Wired" magazine: Issue 6.12)
Prof. Bowling’s research interests include multi-agent learning, game theory, machine learning, mobile robots and competitive computer game environments.  He has authored over 100 publications in his field and contributed greatly to the Robocup competitions.  His research has been featured on the television programs Scientific American Frontiers, National Geographic Today and Discovery Channel Canada, as well as appearing in the New York Times, Wired magazine and in exhibits at the Smithsonian Museum in Washington, D.C.

One of his early poker-playing programs called Polaris defeated some of the world’s top heads-up, limit Texas Hold’em poker players.  Wired magazine created a comic book within the magazine entitled Ante Up, Human: The Adventures of Polaris, the Poker-Playing Robot. 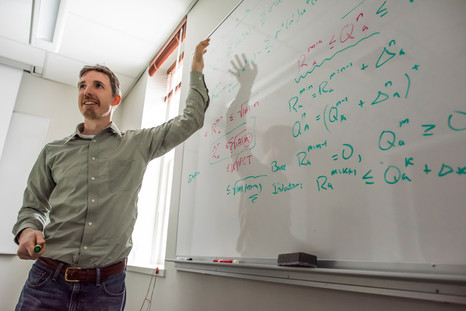 University of Alberta Prof. Michael Bowling showing some of the computations that went into developing the Cepheus program. (source: wsj.com)
Prof. Bowling advises that algorithmic advances in gaming have been used to improve airport security systems, air marshal scheduling and coast guard patrolling and will be beneficial in driving future applications.

In 2011, his Computers and Games teaching team was awarded the Alan Blizzard Honourable Mention Award, which is a national award for “exemplary collaboration in university teaching.”  Prof. Bowling himself was the recipient of the University of Alberta’s Faculty of Science Research Award.

Prof. Bowling is married and has three sons.  His personal interests include board games, curling and indoor wall climbing.