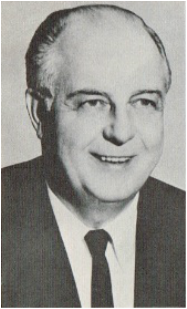 Nationally known banker Mervin B. France is chairman of the board and chief executive officer at the Society National Bank of Cleveland and president and director of Society Corporation.

He worked part-time to defray education expenses at Mount Union College and Ohio State University and was forced to leave Ohio State in his senior year due to a family illness.  Today he is a trustee of both institutions.

Mr. France was working in Cleveland as the Ohio representative of the Pittsburgh Union Trust Company in 1934 when he decided to take an assistant vice president position with Society for Savings.   He advanced through executive positions until 1947 when he became President, making him one of the youngest top bank executives in the nation. 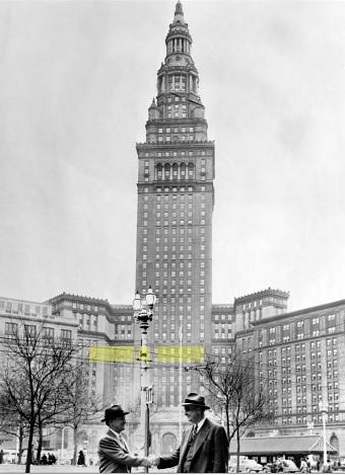 In the 1950 photo above, Mervin B. France (left) shakes hands with John Galbreath of Columbus, new Terminal Tower Group owner. Mr. France is credited with clearing the way for the sale at the purchase price of $35,000.000. (source: books.google.com, Becker, Thea Gallo. "Images of America - Cleveland 1930 - 2000". Chicago: Arcadia Publishing, 2005, p. 41.)
During his tenure, he led the restructuring of the bank from a mutual savings and loan into a wholly owned and nationally chartered bank, the Society National Bank, of which he was co-founder and president in 1956.  When Mr. France joined Society in 1934, total assets of the bank were $112 million.  At the close of 1966, they were $659,599,519.02.  He has led Society through a dramatic period of growth and is considered the dean of Cleveland’s bank executives.

Mr. France married Berenice Renkert on October 12, 1927 and they have two children, William and Elizabeth.

Biographical update: Mr. France resigned most of his duties at Society National Bank in 1968, but remained chairman of the board until January of 1970 when he was appointed an honorary director.

Mervin B. France passed away the following month on February16, 1970 at the age of 67.  Berenice passed away on August 23, 1993 at the age of 90.  They are buried together in Lakeview Cemetery in Cleveland, Ohio and they are survived by their son and daughter.