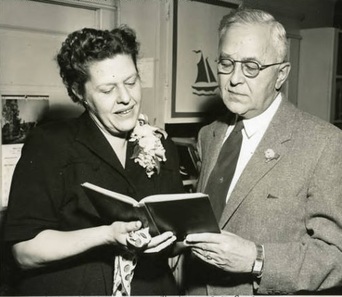 Following graduation from Alliance High School at age 15, Melba Balmat (nee Grimes) Marlett earned her Bachelor of Arts degree from the University of Michigan in 1929 and taught English and drama for a number of years at McKenzie High School in Detroit.  In 1937 she married Norval William Marlett Jr. and two years later she received her Master of Arts from Wayne State University in Detroit.

In the 1940’s and 1950’s, Mrs. Marlett gained wide distinction as an author of mystery novels and in the general field of literature and education.  Five of her mystery novels have been in circulation for an extended period of time and all of her novels have been translated into foreign languages.  Three of her most popular books are Escape While I Can, 1944; Tomorrow Will Be Monday, 1946; and Death Is in the Garden, 1951.

Regarding her writing career she once said, “In spite of seven published books, there are times when I am in despair about my writing.  Then, in order to cheer myself up, I look myself up in various reference books.  There it says I am a writer.”

Mrs. Marlett is a trustee of the Cranbook Writers Guild and is listed in Outstanding Educators of America (1970). She is also listed in Michigan Writers, Who’s Who in American Women and American Novelists of Today.  As a member of Theta Sigma Phi, an honorary society for women in communication, Mrs. Marlett was the recipient of their Headliner Award for her outstanding contributions to the field of communication. 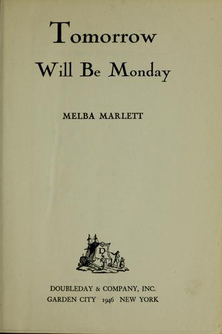 "Tomorrow Will Be Monday" by Melba Marlett, Doubleday, 1946 (source: openlibrary.org)
In the early 1960’s Mrs. Marlett accepted a professorship position at Oakland Community College in Bloomfield Hills, Michigan. She now resides with her husband, an automotive engineer, and son, Norval W. Marlett III in Hartland, Michigan.

Biographical update: The Second Mrs. Porter, a short story written by  Melba Marlett, was published in Alfred Hitchcock’s Mystery Magazine in November of 1986.  In her later years she took up competitive duplicate bridge and achieved ACBL Club Master status.  In 1991 Melba’s son and his spouse, Gloria, brought her to Alliance to visit with her younger brother, Dr. Leo Grimes, AHS ’28 and member of the Athletic Hall of Fame, and some of her childhood friends.

Melba Grimes Marlett passed away on July 25, 1994 at the age of 84.  Her ashes are interred in the Balmat family plot in Union Cemetery outside of Louisville, Ohio.  Norval Marlett had passed away 15 years earlier on October 16, 1979, following a long illness.  Prior to passing he donated his remains to the Michigan University School of Medicine.  Melba and Norval are survived by their son and his spouse, a grandson and his spouse and two great-grandchildren.  They also had a grandson who is deceased.