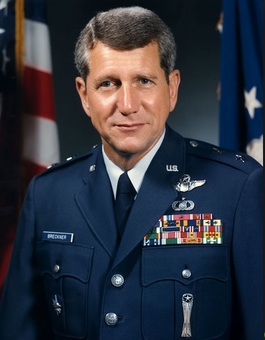 General Breckner was born in Alliance.  He is the son of William J. Breckner, Sr. and the late Pauline Bertschy Breckner.  After graduation from high school he attended Ohio State University, Troy State University, and graduated from State University of New York.  He is a graduate of Squadron Officer School, the Air Command and Staff College, the National War College and the program for senior government managers at Harvard University.

General Breckner received his commission and wings through the aviation cadet program in 1955 and attended Day Fighter School at Nellis Air Force Base in Nevada.  He is now Commander of the 17th Air Force, the Sembach Tactical Operations Center and the NATO Sector Operations Center Three in Germany.  He commands all United States Air Force wings throughout Germany, the Netherlands, and Belgium.  He was formerly Chief of Staff, headquarters United States Air Forces in Europe. 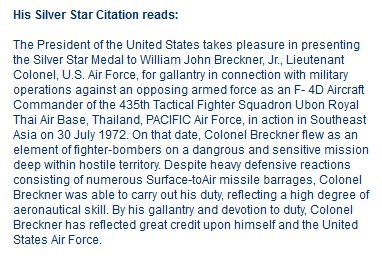 General Breckner is a Vietnam combat veteran with two tours in Vietnam.  During his first tour in 1966, as an exchange pilot with the U.S. Navy for 38 months, he flew 100 fighter-bomber missions in A-4’s from the aircraft carrier USS Intrepid.  He has a total of 219 carrier landings.

He returned to Vietnam in 1972 serving as operations officer for the 435th Tactical Fighter Squadron, 8th Tactical Air Wing, flying F-4 Phantoms.  On July 30, 1972 he was shot down over Hanoi by a surface to air missile and was a prisoner of war until March 1973.