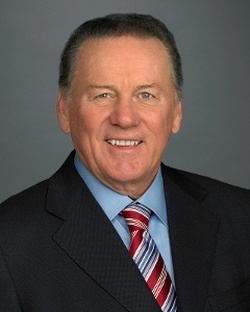 Len Dawson, a record-setting passer in professional football as a quarterback of the Kansas City Chiefs and radio station sports director, has also been distinguished in civic service. An Alliance native and the ninth of 11 children, Len starred in both football and basketball at AHS and was named first-team all-state in both sports.  As the protégé of Coach Mel Knowlton, he went on to athletic fame at Purdue University where he graduated in 1957.

While at Purdue, Len led the Big Ten Conference in passing yardage in each of his three varsity years in addition to playing defense and serving as the team’s kicker.  He was an All-Big Ten quarterback each year.

In 1954, he married his high school sweetheart Jacqueline “Jackie” Puzder and they have two children, Lisa Anne and Len, Jr. 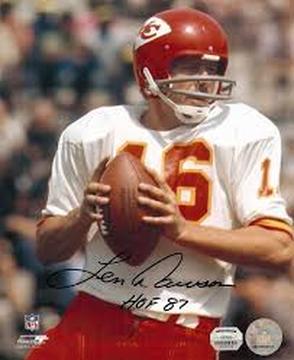 Len Dawson, Kansas City Chiefs (Source: likesuccess.com)
Len began his professional career as a 1957 first round draft choice of the Pittsburgh Steelers and then with the Cleveland Browns in 1960.  In 1962 he signed with the Dallas Texans who moved to Kansas City and became the Chiefs in 1963.  In his first season with Dallas, he led the American Football Conference in passing touchdowns and yards per attempt and was the Sporting News’ AFL MVP.  Over the next ten years, he won four AFL passing titles and was an AFL All-Star six times, ending the 10-year run as the AFL’s highest rated passer.

The Texans were AFL Champions in 1962 and the Chiefs were Champions in 1966 and 1969.  The 1969 team went on to win the 1970 Super Bowl, beating the heavily favored Minnesota Vikings 23-7.  Len Dawson was the game’s MVP.  That same year he was honored as a member of the second team All-time All-AFL Team.

Off of the football field, Len has been chairman of the Missouri fund raising campaign for retarded children and was the 1972 state chairman of the “I Quit” campaign of the American Cancer Society.  He has been active in other Missouri campaigns.  In 1973, he was honored as the Walter Payton NFL Man of the Year.  The AHS athletic field is named in his honor. 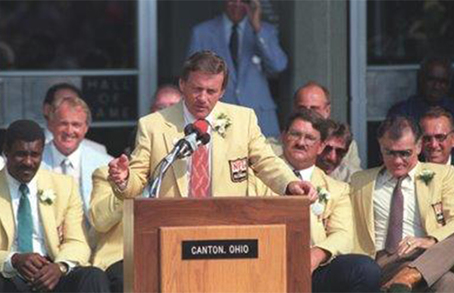 Len Dawson at his 1987 Pro Football Hall of Fame induction in Canton, Ohio. (Source: kcchiefs.com)
Biographical update: In 1976, Len Dawson announced his retirement as a player at the age of 40.  Two years later, Jackie Dawson passed away at age 42.  She is survived by Len and their two children.

In 1966, while still playing for the Chiefs, Len became the sports director at KMBC-TV in Kansas City which led him into a second career in sports broadcasting.  From 1977 to 2001 he served as the host of HBO’s Inside the NFL and also worked as a color analyst for NBC.  In 1985, he took a broadcasting position with the Chief’s Radio Network

Len Dawson received football’s ultimate tribute in 1987 when he was inducted into the NFL’s Pro Football Hall of Fame in Canton, Ohio.

Len Dawson is married to his second wife, Linda, and they live in Kansas City.