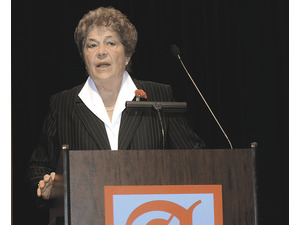 Judith Liber graduated from Oberlin College with a degree in Music and did her graduate study at the University of Illinois and at the Mozarteum in Salzburg, Austria.  Her musical training began at age five on the violin.  When she was seven she also began lessons on the piano and she continued with both instruments until she heard her first harp recital at age 10. 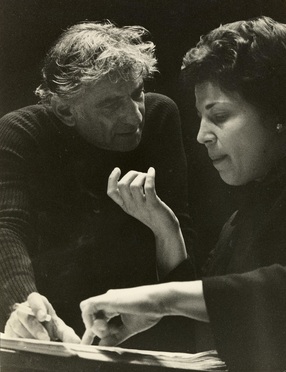 Judith Liber, Principal Harpist (Israel Philharmonic Orchestra) with Leonard Bernstein studying a score in 1967. (Source: pinterest.com)
Ms. Liber is an internationally renowned teacher.  She taught at the Tel Aviv University, Jerusalem Academy for Music and Dance, and the Accademia Musicale in Florence, Italy.  From 1983 to 2013, Judith was the Music Director and Vice President of the International Harp Contest in Israel and President of its International Jury.

Her major contributions to society are her roles as a performing orchestra musician, soloist, chamber musician player, and as a teacher and mentor for many young harpists from all over the world seeking to develop the beauty and projection of the harp.

Perhaps the highlight of her outstanding and celebrated career was in March of 2000 when the President of Israel, Ezra Weitzman and his wife Rehuma requested that she perform at the ceremony welcoming Pope John Paul II to the President’s Mansion in Jerusalem. Ms. Liber was told that they particularly wanted to open the ceremony with harp music to demonstrate the ancient Biblical connection of the harp and King David.
Of the event, Ms. Liber said, “For me, a Protestant from Ohio, making music on the ancient instrument of the Bible to bridge a dialogue between the President of the State of Israel and the Pope of the Catholic Church was a humbling honor.”

Judith resides on Lake Como, Italy with her husband Zvika Litvak.  They have 2 children and 5 grandchildren.  She is retired, but continues to teach.  Young harpists come to her seeking to develop the beauty and projection of the sound of the harp.  Judith Liber was nominated by Mary Kron.