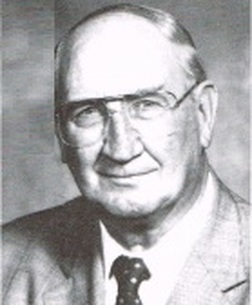 John Klusch was a victim of significant losses early in his life.  His father died before his first birthday and his mother died before he graduated from high school.  But, instead of letting those early losses defeat him he learned with help from his church, neighbors, friends and the community.  He also remembered early reminders from his mother to always “give back” and he lived by those words for the rest of his life.

From 1935 to 1944, Mr. Klusch worked as a machinist apprentice and machinist for Alliance Machine Company.  In 1944 he enlisted in the Merchant Marines and was sent to Marine Engineering School on Staten Island, NY.  He sailed as a junior engineer during World War II.  From 1947 to 1949 he was employed by Turner Engineering Company of Salem, Ohio.  In 1949 Mr. Klusch was one of five co-founders of the East Ohio Machinery Company which he still owns today.

On November 22, 1951, John married the former Roene Alberta Eggeman, a “partnership” that lasted for the rest of their lives. 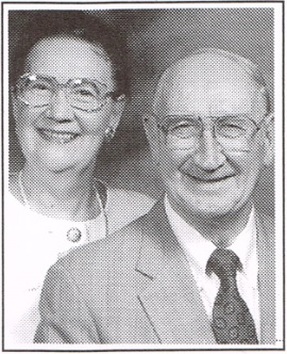 Roene and John Klusch (Source: AHS Foundation Newsletter, Spring, 2001)
In 1961 the East Ohio Machinery, after a disastrous fire, was relocated to the present site on East State Street.  In 1962 Mr. Klusch became the President of the company, a position he held until his retirement.  Under Mr. Klusch’s leadership the company has grown from a firm employing 5 people to more than 250 people in four offices, offering engineering services and construction supervision to plants throughout the world.

Mr. Klusch has become widely known for his community involvement and service to Alliance and the Alliance area.  He served as committee chairman and was instrumental in the securing land for the Hot Stove League state tournament which is now known as Butler-Rodman Park.  He has served on advisory committees for Alliance High School, Salem Trade Schools, and Kent State University College of Technology.

In 1982, when it was determined that Alliance Citizen’s Hospital needed to expand, Mr. Klusch served on the hospital’s expansion committee.  In the early 1990’s, he was instrumental, through the Len Dawson Celebrity Golf Classic, in raising over $100,000 for the Mel Knowlton Scholarship Fund.

Mr. Klusch served as a director of the Alliance High School Booster Club for 20 years and Director of Alliance Hot Stove League for 20 years including six years as its secretary.  For twelve years he was a director of Alliance Federal Savings and Loan Association.
In 1985 Mr. Klusch was the impetus behind the creation of the Alliance High School Foundation to provide scholarships for AHS seniors and still serves as the foundation’s president.  He is also a member of the Board of Directors of the Alliance Area Chamber of Commerce and the Advisory Committee to Stark Technical College for Design Engineering Technology.

On July 31, 2001, Roene Klusch, John’s lifetime “partner”, passed away.  Five months later on December 27, 2001, John Klusch passed away at the age of 85.  In February of 2002, it was announced that John and Roene Klusch had bequeathed $562,627 to the Alliance High School Foundation for future scholarships.  John Klusch spent his entire life honoring his mother’s advice.