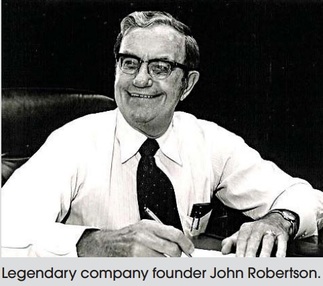 Mr. Robertson has been the head of four national wholesaler groups including the National Association of Wholesalers headquartered in Washington D.C. and the American Supply Association with 1,150 members from every state including Alaska and Hawaii. 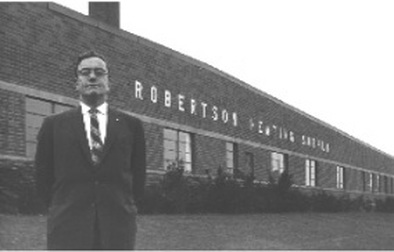 John Robertson in front of his facility at the SE corner of S. Rockhill Ave. and W. Main Street in the mid 1950's. (Source: rhs1.com)
He is the author of over 100 articles and a book entitled, “Wholesalers Ideas for Management”.  In the early ‘60’s he wrote a management column and a taxation column for a trade journal which ran for four years.

Mr. Robertson served on the Alliance YMCA board for 12 years, one as president.  For 17 years he was a member of the City Planning and Zoning Board.  He is a director of the United National Bank and Trust Company.