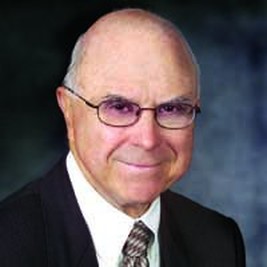 John “Jack” Peters was born in Salem, Ohio.  In 1929 the Peters family moved to Alliance to open the Raven Restaurant.

Mr. Peters, a 1943 graduate of Alliance High School, attended Dennison University from 1943 to 1945 and was a member of the U.S. Navy V-1 Program.  He earned his Bachelor of Science degree in Business Administration from the University of Pennsylvania in Philadelphia in 1947 and attended the MBA program at Akron University from 1958 to 1959. 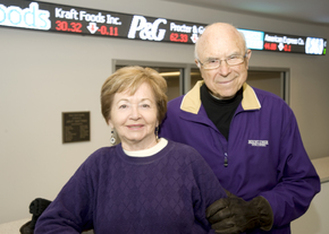 Jack and Madge Peters in front of 25 foot UMU stock ticker named in his honor (source: mountunion.rdu/stock-ticker-display-named-in-honor-of-jack-peters)
Mr. Peters is a member of Phi Gamma Delta Fraternity and Friars Senior Society.  Active in civic affairs, he is a former director of the Rotary Club of Alliance, and he was given the Rotary Paul Harris Fellow Award.  He was one of the original organizers of the Alliance Area Youth Center.  Mr. Peters is a past president of the United Way of Alliance, a director for ten years of the Alliance Area Chamber of Commerce, past president and current board member of Rodman Public Library, past president of the Alliance Citizen’s Hospital Association, and was a director of the Alliance Y.M.C.A. for a number of years.  He is currently a trustee of Mount Union College having served since 1986.

Mr. Peters is married to the former Madge Patterson of Scranton, Pennsylvania.  They have three children, Suzanne, Joan and Todd along with six grandchildren.