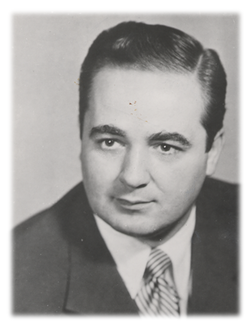 John’s parents were immigrants from Romania who both worked in factories.  John sold newspapers at age five and worked other menial jobs in his youth to help support his family.  After high school, he got a job in a local forging plant to pay his way through Mount Union College, graduating in 1940.  He then began his successful career with Alliance Manufacturing as a stock boy.

During John’s leadership of Alliance Manufacturing, the company was renowned for the development and manufacture of the Genie remote-control garage door opener.  It was the first garage door opener of its kind and became the market leader in sales and service.  Additional design improvements allowed the product to be retailed in mass to millions of customers throughout the world.  The Genie Company is currently located in Mount Hope, Ohio.

Alliance Library Board taken February 8, 1963, L to R: Clarence Steffy, C. C. Henderson, John Bentia, Gus Graf, Milton Geiger, Ruby Hoover and Fern Tuttle. (source: alliancememory.org)
Another product that became a symbol of the Alliance Manufacturing Company under John’s tenure was the Tenna-Rotor indoor directional control of an outdoor television antenna.  Many different models and improvements were mass produced from the early 1950’s throughout the 1960’s.

In 1957 Mr. Bentia received the Horatio Alger Award honoring achievements of outstanding Americans who have succeeded in spite of adversity and exemplify dedication, purpose and perseverance in their personal and professional lives.

Biographical update:  When Gary Wilson ’58, worked summers at Alliance Manufacturing, he emulated John Bentia by asking John’s secretary what books he read and then read them himself.  He went on to become Chief Financial Officer for the Walt Disney Company and the Marriott Corporation, and chairman of the board of Northwest Airlines.  Gary Wilson, who was obviously influenced by John Bentia, was inducted as an AHS Distinguished Alumnus in 1986.