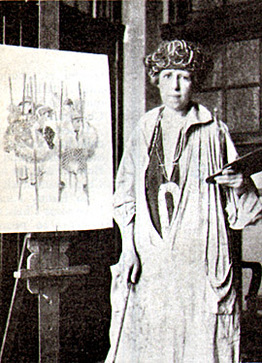 Miss Gertrude Kay, now deceased, was a writer and illustrator of children’s books.  A graduate of the Pennsylvania Academy of Fine Arts, she also studied at the Philadelphia School of Design and Drexel University.  Following her schooling, she returned to Alliance where she maintained a studio.

Miss Kay won national awards for her watercolors.  Her works were published in many national magazines, including McCall’s and Ladies’ Home Journal, and appeared throughout the United States and around the world.  While she illustrated many children’s books in her career, she was also a successful author of children’s books as well.

In the early 1920’s she began traveling in China and Japan with her mother and sister and many of her paintings reflect those travels.  Her popularity increased and she became well-known for her colorful paintings including her illustration of Lewis Carroll’s Alice’s Adventures in Wonderland.

Gertrude Kay was killed in an automobile accident on December 19, 1939.