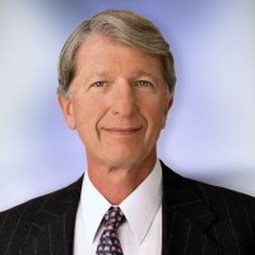 Following his graduation from Alliance High School in 1958, Gary Wilson earned a B. A. degree from Duke University in 1962.  In 1963 he received an M.B.A. degree from the Wharton School of Finance, University of Pennsylvania.

Mr. Wilson is a contributing author to the “Chief Financial Officer” handbook and has had articles in hotel financing and sugar economics published in various magazines. 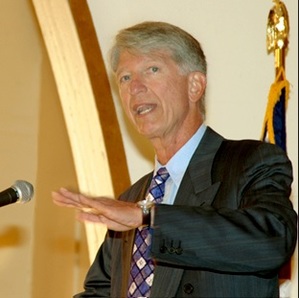 Gary L. Wilson, head of Northwest Airlines, speaking at the first Dean’s Business Breakfast Series of the USC Marshall School of Business (source: classic.marshall,usc.edu; photo by Eric Sullano)
While at Alliance High School, Mr. Wilson was a member of the National Honor Society and the Alliance High School varsity football team.  While at Duke he played varsity football and played in the Cotton Bowl with the Duke team.  He was also an Atlantic Coast Conference All Scholastic Athlete for three years.

As chief executive officer of the Marriott Corporation, Mr. Wilson was in charge of restructuring a 1.5 billion dollar hotel business.  As chief financial officer of Disney Productions, he will take charge of strategic planning and use of Disney assets including the building of the new Disney World in France.

It has been noted that over the past 20 years Gary L. Wilson’s aggregate corporate expansion and development programs have created over 50,000 new jobs.