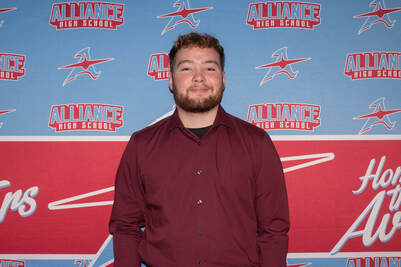 2022 recipient Thomas Butt
One name that inspires an AHS graduate to reminisce about athletics and football excellence is Furcolow.  Francis (Fran) Furcolow ’31 was a four year starter for the Aviators on offense and defense and went on to play with the Minerva Merchants, a semi-pro team that went undefeated for many years.  After high school and his marriage to Esther Williams Furcolow ‘33, he worked at Transue & Williams, Kulka Construction, and Morgan Engineering.  During that time he purchased a farm on Reeder Road near Louisville and attended classes at Ohio State University to learn agriculture and cheese making.  Fran continued farming as a hobby for the rest of his life.  Francis and Esther had three sons,

David Furcolow ’55 was a punter and linebacker for the Aviators for 3 years, contributing to some of the best teams in Alliance football history. After attending Kent State University and an enlistment in the U.S., Army, Dave became a construction electrician working throughout Stark County.  He completed thirty-five years in the Army reserves, retiring as a Command Sgt. Major.  For more than twenty-five years he volunteered as a football coach at St. Joseph, Regina Coeli, and Marlington and Alliance middle schools.  Dave passed away in 2013.

Edward F. (Ed) Furcolow ’60 was the starting center on the 1958 Alliance State Championship team.  Like his father, he played both offense and defense for three years.  He attended Ohio University, starting as the center when the Bobcats went undefeated and won the Mid-American Conference championship.  Following college he enlisted in the Army and was commissioned as a First Lieutenant.  He played semi-pro football for the Canton Bulldogs.  Ed also became a construction electrician working throughout Stark County until his untimely death in 2001.

Dr. James P. Furcolow ’61, son of Francis Furcolow, brother of David and Edward Furcolow, has chosen to remember his family with a scholarship to be presented annually to an AHS football player, who exemplifies the football tradition the Furcolow family perpetuated at AHS.  He and his wife, Maria, David’s widow, Sandra Yendrich Furcolow ’59, and Genevieve Louise Williams ’37, sister of Esther ’33, have contributed an initial $30,000 to honor these family members.  It is their hope that family and friends will support the growth of this scholarship endowment to help AHS graduates continue their education and to encourage football excellence at Alliance High School.