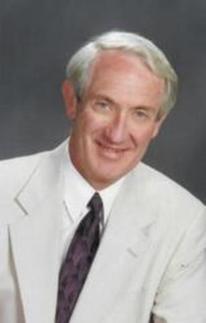 Following graduation from Alliance High School, Dr. Fiegenschuh attended Mount Union College earning a B.A. degree in 1969.  He earned his M.D. degree from Northwestern University Medical School in 1973.  From 1973 to 1977 he served as a resident in general surgery at Akron City Hospital.  Dr. Fiegenschuh became chief resident at Akron City in 1977.

In 1977 Dr. Fiegenschuh had an article published in the professional journal “Surgery” on, False Normal Oral Cholecystogram”.  He has served as president of the Questors, a member of the St. Paul’s Lutheran Church Council and the Mount Union College Alumni Council. 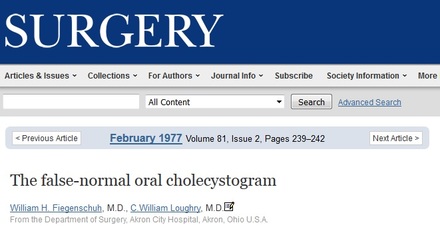 Online version of Dr. Fiegenschuh's coauthored article in the Feb. 1977 professional journal "Surgery". (Source: surgjournal.com)
Because of Dr. Fiegenschuh, Alliance City Hospital is one of the smallest community hospitals to have such an extensive surgery program, especially in the areas of thoracic and vascular surgery.

Dr. Fiegenschuh is one of the youngest graduates to be chosen as a Distinguished Alumnus of Alliance High School.

Biographical update: Following his retirement from surgery, Dr. Fiegenschuh began a fellowship at University Hospitals in Cleveland for the treatment of alcoholism and addiction and opened a practice of addiction medicine in North Canton.  He was also director of impact at Mercy Medical Center until his second retirement in 2012 for health reasons.

Dr. Fiegenschuh passed away on June 28, 2015 at the age of 67.  He is survived by his spouse Sandi (Strong) Fiegenschuh; two sons, Michael (Suzanne) Fiegenschuh of Seattle, Washington, and Matthew (Denise) Fiegenschuh of Alliance; stepson, Erik Davies of Canton and grandchildren, Benjamin, Brook and Molly Fiegenschuh.  He is interred at Highland Memorial Park east of Alliance.