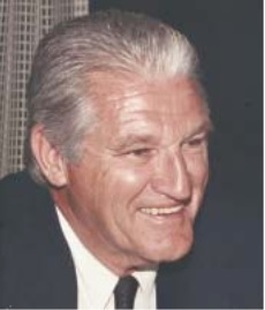 Doctor King graduated from Mount Union College in 1933.  He received his M.D. degree from Harvard Medical School in 1937.  Dr. King interned at Bellevue Hospital in New York City in 1937 and 1938.  From 1939 to 1943 he was resident surgeon at Roosevelt Hospital in New York City.  Also, in 1939 he married Louise E. “Peggy” Perkins who was the daughter of Maxwell Perkins, the world famous book editor.

Dr. King returned to Alliance and served the Alliance community until he retired in 1979.  While in Alliance he was chief of surgery at Alliance City Hospital from 1962 until 1975.  He was Mount Union College’s surgeon from 1947 until 1959.  For twenty four years Dr. King was the team physician for all sports at Alliance High School.  It is estimated that during this period Dr. King did over 20,000 physical examinations for Alliance athletes.  In 1976 he was named the Outstanding Team Physician of Ohio by the Ohio State Medical Association and the Ohio High School Athletic Association.

Dr. King played football and basketball at both Alliance High and Mount Union College.  He is an outstanding golfer and helped many area golfers including Don Albert, former Alliance High School state champion and Gordon Jones who is still playing on the Senior tour.  Over a span of 35 years Dr. King rarely missed an Alliance football game. 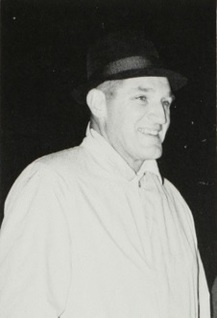 Dr. Robert King on the sideline of an AHS game in 1969. (source: 1970 Chronicle)
In 1971 Dr. King became chairman of the “Alliance High School Now” committee.  His outstanding leadership and countless hours of meetings and door-to-door campaigning made possible the construction of the present Alliance High School building.