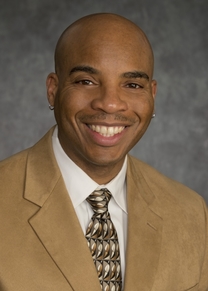 Dr. Michael Gordon Grimes is a member of the Alliance High School Class of 1985.  He initially attended Oberlin College and then received his bachelor’s degree from the University of Findley.  Following his graduation from Northeastern Ohio Universities College of Medicine in 1998, Dr. Grimes went on to complete his family practice residency at Summa Health in Akron, Ohio.

He is currently in private practice in Akron where he strives to serve all patients, but his passion is to serve the African-American community.  His ultimate goal is to create a network of minority doctors throughout northeast Ohio to provide better access of care to a community that has been historically underserved. 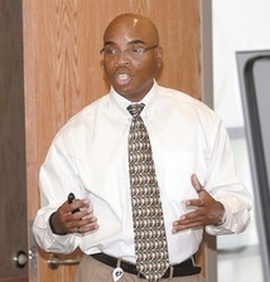 Dr. Michael Grimes speaking about prediabetes during a lecture at Alliance Community Hospital. (source: the-review.com, photo/Kevin Graf)
In 2006, Dr. Grimes was honored with an award from the Alliance Negro History Club.  He was chosen as the 2007 Alumni Legacy Award recipient by the Northeastern Ohio Universities College of Medicine (NEOUCOM).  His accomplishments through advocacy, volunteerism and commitment to the practice of medicine contributed to this honor of Dr. Grimes.

Dr. Grimes is a member of the American Academy of Family Physicians and the Ohio State Medical Association.  He is a frequent speaker making presentations throughout the state.  He has two children: Cortne and Jaylon.