Dr. Mary Allott Agna grew up in Alliance where her mother was one of the first registered nurses in the state of Ohio and her father owned a hardware store and served as the Mayor.  Dr. Agna attended Mount Union College and graduated from the University of North Carolina with a major in bacteriology.  She then graduated from of the University of Cincinnati College of Medicine where she met her husband, James W. Agna, who is also a doctor.  They married in 1949.

Together, they served in the U.S. Public Health Service in Burma from 1951 to 1953 and at the Hôpital Albert Schweitzer in St. Mark, Haiti in 1958.  In 1959, they moved to Yellow Springs, just outside of Dayton, Ohio, where she served as the Clark County health commissioner and subsequently, as Health Commissioner of the Green County Health Department.

In 1970, they moved to Cincinnati where she and her husband joined the University of Cincinnati faculty.  Dr. Mary Agna served as the assistant clinical professor of environmental health and community medicine.  At that time she was also serving as the chief health officer for the Northern Kentucky District Health Department. 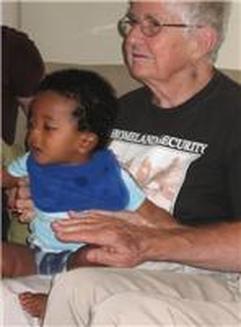 Dr. Mary Allott Agna (source: legacy.com/obituaries/gazettenet)
Biographical update: In1974, Dr. Mary Agna was awarded a federal grant to establish the first family medicine residency in the country at the University of Cincinnati and she went on to become the assistant dean of the College of Medicine and associate professor of family medicine.

She and her husband returned to Yellow Springs in 1979, joining the Wright State University Medical School faculty.  She served as an associate professor and vice chairman of the department of family medicine and associate professor of community medicine, before retiring in 2013.  During her years on the Wright State Admissions Committee, the number of female medical students rose to over 50 percent due to her commitment to equal representation.

Dr. Mary Allott Agna passed away on January 6, 2015 at the age of 90.  She is survived by her husband of 65 years, five children with four spouses, nine grandchildren with three spouses and two great-grandchildren. (source: legacy.com/obituaries/gazettenet)