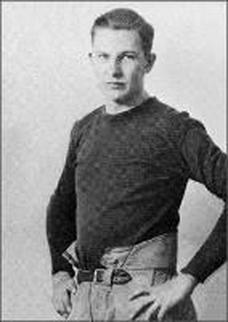 Dr. Wilcoxon, who is distinguished in the realms of athletics as a player and coach and in the field of medicine, is a graduate of Mount Union College and the School of Medicine at Chicago University.  He also holds a Master of Science degree from the University of Illinois.  He is now operator of the Alliance Health Center and specializes in the field of gynecology.

Dr. Wilcoxon won as a participating athlete at Alliance High School and at Mount Union, where he received All-Ohio honors in basketball and eventually alternated his coaching duties at AHS with attendance in medical school.  His 1932 football team was undefeated.  In 1929, he engineered the low-score record for high school basketball when his Alliance team defeated Massillon 3-2 in a never-to-be forgotten contest. 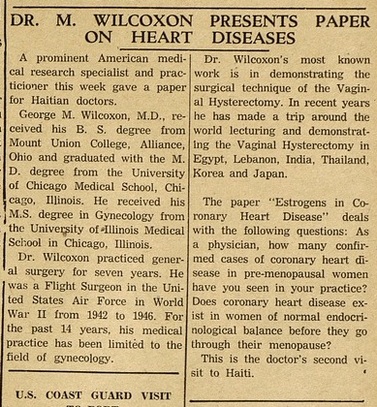 Article in the Haiti Sun newspaper on Sunday, December 11, 1960 (Source: ufdc.ufl.edu)
Dr. Wilcoxon coached football and basketball at AHS from 1927 to 1940 when he retired from coaching to devote his entire time to the practice of medicine.

In 1982 Dr. Wilcoxon received the Alumni Service Award from Mount Union (since renamed the Dodie Davis Alumni Award) for outstanding achievement in a chosen profession or field and service to the university or community.  The award represents the highest non-academic honor an alumnus/alumna can receive from Mount Union.

Biographical update: Dr. Wilcoxon’ suffered the passing of his daughter Sherry Anne (Wilcoxon) Lowe on September 18, 1983 and the passing of his spouse, Louise, on the following day.  Their daughter, Georgia Louise (Wilcoxon) Lowe passed away on April 9, 2008.  They are all buried in Alliance City Cemetery.  Dr. and Mrs. Wilcoxon are survived by their youngest daughter Margaret “Peggy” (Wilcoxon) DeTombe, who currently resides in London, Ohio.