David R Floyd a 1962 AHS graduate has endowed the Donna Clayton Floyd Memorial Scholarship with a gift of $ 45,000.00. The AHS Foundation will administer this fund with scholarships to be awarded annually to AHS graduating seniors.
Donna graduated from Alliance High School in 1961 and returned to AHS the following year to participate in the newly established Diversified Cooperative Training Program. She was in the drafting program and David in the auto mechanic trade. They were in class together in the morning with Mr. Turman as the instructor. In the afternoon Donna went to the Alliance Machine Company for ‘on the job’ experience and David to the Henschen Motor Company.

After a year of training in drafting, Donna gravitated toward the printing trade. Her encounters with Frank A Hoiles of the Alliance Review led him to recruit her to the printing shop at the newspaper. She helped to establish the printing department in ‘Cold Type Compositing,’ the new printing process of the 1960’s.  Initially in the advertising printing department Donna transferred to the Commercial printing department, working for Elvin Wilson ’35. Donna continued to work at the Review for over twenty years. When the Commercial Printing Department was closed, as the printing process was replaced by computer driven methods, Donna retired from the Review. She then worked at Alliance Commercial Printing and retired a second time, from Jarman Printing.
​
David and Donna were married in November 1962, moved to California, and after David was drafted, returned to Alliance before his enlistment began. David served in the U S Army in the Mekong Delta, of Viet Nam, where he was wounded in action. After the military, he worked in auto sales at Henschen’s, as a machinist, an insurance agent and finally as Branch Manager at Bank One, retiring in 1999.
Although neither graduated from college, the Floyd’s have held education and training as important elements in the lives of young people, especially now in the twenty-first century. David expresses that with Donna’s love for life and for her work, she would be pleased to know that her spirit will live on in the recipients of this scholarship. To this end, the Donna Clayton Floyd Memorial Scholarship will be awarded to AHS graduating seniors planning to seek training for any of a wide variety of trades or technical careers, that may or may not require a four-year degree. 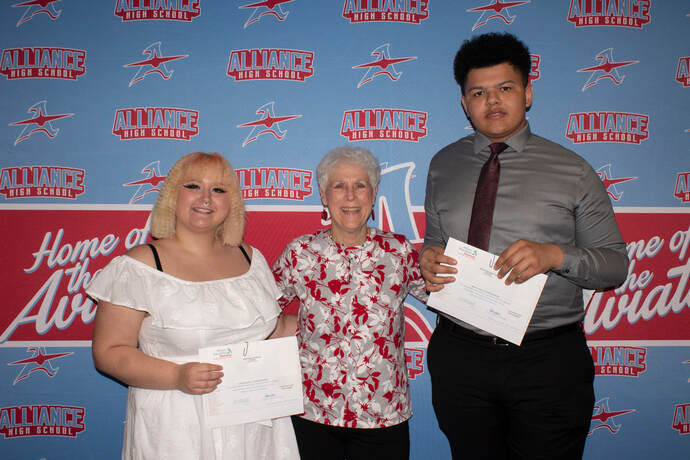