Donald Wade Patrick was born in Gallitzin, Pa. and moved to Alliance at a young age.  He graduated from Alliance High School in 1920 where he earned eight letters in football, basketball and track.  In 1925 he moved to Cleveland to play professional football for the Cleveland Bulldogs.

In 1929, the year of the first National Air Races, he took up flying at Cleveland Municipal (Hopkins) Airport and quickly obtained his license qualifying him to become an instructor.  Soon after, he entered into a partnership with E. C. Sundorph to form the Sundorph Aeronautical Corporation.

After his partner’s untimely death in 1941, he became president and controlling stockholder.  Over the years, Sundorph Aeronautical schooled a very large percentage of airline captains with their Air Transport Rating courses and Mr. Patrick became one of the pioneers of instrument flight. 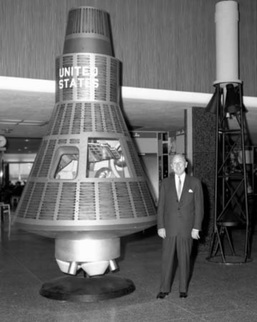 Airport Commissioner Donald Patrick next to the Project Mercury display at Cleveland Hopkins Airport in 1961. (Source: nasaimages.lunaimaging.com)
From 1933 to 1941 he was a lieutenant in the U.S. Air Corps Reserve and the Ohio National Guard.  During World War II, he remained in Cleveland at government request and Sundorph Aeronautical trained hundreds military pilots in instrument flight.

During the closing months of the war, the editors of Life magazine queried aviation, “Where can we find the best pilot to fly a reporter-photographer team on a tightly scheduled 10,000 mile tour of the nation?”  The answer: “Call on Don Patrick of Cleveland.”  And Mr. Patrick flew the 29-day tour.

In 1958 Mr. Patrick resigned as president of Sundorph Aeronautical and sold his interest to accept an appointment from Mayor Anthony Celebrezze as Commissioner of Cleveland Hopkins Airport, a position he held for many years.