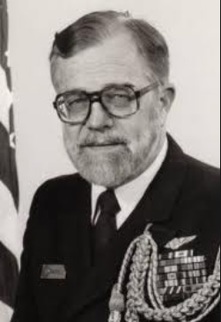 Captain Cracknell began his military service in 1949 when he enlisted in the U.S. Naval Reserve.  In 1957 he was selected to attend Officer Candidate School and was subsequently commissioned as an Ensign.  On July 5, 1958 he married the former Imogene “Jeanne” Tschabold from Minerva and they have two sons and two daughters.

Continuing his education, he was awarded a Master’s degree by Duke University in 1966.  In 1967 and 1968 he attended the Naval War College in Newport, Rhode Island, and the Defense Intelligence School in Washington D.C. in 1968 and 1969. 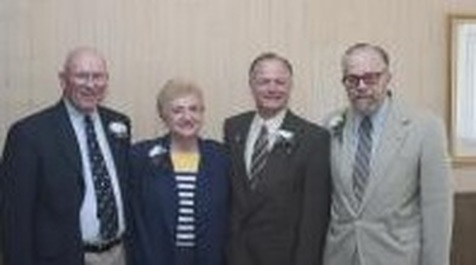 Captain William H. Cracknell, Jr. (far right) at Mount Union College with his three co-recipients of the 2010 Dodie Davis Alumni Service Award. (Source: mountunion.edu)
Captain Cracknell’s long and distinguished career includes teaching History and English at Alliance High School, serving as a Naval Intelligence Officer from 1958 to 1963 and assistant professor of Naval History at Duke University from 1963 to 1966.  Following a tour in Vietnam as a Navy Projects officer, he served as Navy Liaison Officer for the Ministry of Defense in London, England.

Captain Cracknell is a member of Kappa Delta Education Honorary Society, the U.S. Naval Institute, Royal United States Institute in London, England, the National Honor Society and National Thespians.  In addition to being an AHS Distinguished Alum, Captain Cracknell was a 2010 recipient of the University of Mount Union’s Dodie Davis Alumni Service Award.
His military decorations include the Bronze Star, the Defense Superior Service Medal, the Staff Air Medal, the Vietnamese Staff Honor Medal, the Navy Meritorious Service Medal, and he was honored as a Distinguished Graduate of the Naval War College.

Biographical update: Captain Cracknell retired in 1988 as the Commander of Naval Intelligence in Suitland, Maryland.  In 2001 he and his spouse moved back to Alliance to be with friends and family.  Four years later, Captain Cracknell passed away on October 28, 2005.  His spouse, Jeanne passed away on April 2, 2010.  They were both 74 years of age at their passing.  They are buried together in Arlington National Cemetery in Arlington, Virginia.

Former location of the Office of Naval Intelligence in Suitland, Maryland where Captain William H. Cracknell spent his last assignment as the Commander until his retirement in 1988. Source: pinterest.com)