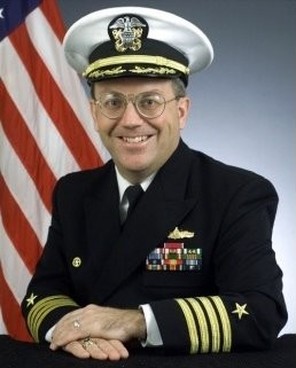 Captain Dixon completed training in nuclear propulsion and surface warfare training and was assigned to the U.S.S. Carl Vinson where he was the first officer to earn designation as a surface warfare officer.  He subsequently served on the U.S.S. Virginia and the U.S.S. Mississippi.

In 1989 Captain Dixon graduated from the Armed Forces Staff College and reported to the United States Atlantic Command where he served as a Navy Planner for Joint Operational Planning until 1992.

In 1992 Captain Dixon became Executive Officer on the U.S.S. Virginia, the flagship for counter narcotics patrols.  Following his tour as executive officer, Captain Dixon joined the staff of the Deputy Chief of Naval Operations as the Assistant Head of the East Asia and Pacific Branches until 1995.  From 1995 to 1996 he was a Federal Executive Fellow at the Fletcher School of Law and Diplomacy at Tufts University where he earned a Master’s Degree in International Relations.

Captain Dixon was given command of the U.S.S. Hawes, a frigate deployed as a counter narcotics patrol vessel.  The Hawes earned the U.S. Navy Battle E award during Captain Dixon’s tour.  Following command of the Hawes, Captain Dixon served as First Assistant Chief of Staff for Operations Southern Command in Puerto Rico. 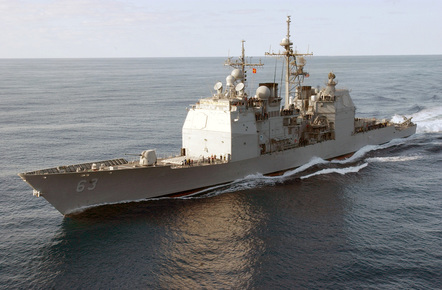 U.S.S. Cowpens (source: wikipedia.org)
In April 2002 Captain Dixon assumed command of U.S.S. Cowpens (CG 63) forward deployed to Yokosuka, Japan.  During his tour, Cowpens has deployed throughout the western Pacific Ocean, the Indian Ocean, and the Arabian Gulf in support of Operations Enduring Freedom, Southern Watch, and Iraqi Freedom.  Cowpens served as CTF-50 Air Defense Command during Operation Iraqi Freedom and launched 39 Tomahawk missiles in support of that operation including the first missile fired from the Arabian Gulf.  Capt. Dixon and the Cowpens continued to serve as Air Defense Command for the U.S.S. Kitty Hawk Strike Group throughout 2003.  The ship has participated in numerous multi-lateral exercises throughout the Pacific Region.

Captain Dixon is married to the former Karen Elliott-Rothrock of Virginia Beach, VA.  Their family includes a son, Charles, in high school and a son, Manning, in middle school.