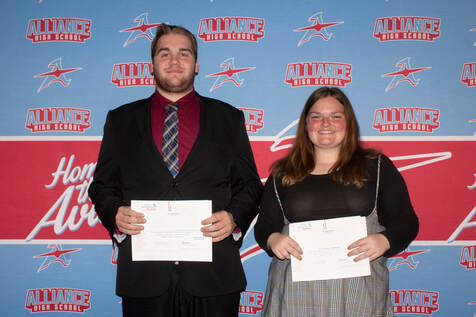 2022 recipients (left to right) Jacob Collins, Shyanne Yeager
The Dr. William D. & Mary Lou Baker Health Scholarship was created by their children in honor of their parents’ devotion to medicine, both in private practice and community outreach.  Jeff Baker ’68, Joan Baker Bankes ’72, Tom Baker ’73, Chip Baker ’76, and Ann Baker Storck ’84 made the decision to remember their parents with a $50,000 donation to the AHS Foundation to establish an endowment that will present scholarships to AHS graduates who will be furthering their education in a health care related field.

Dr. Baker earned his medical degree at Case Western Reserve Medical School in 1944 and served his residency at Crile Veterans Administration Hospital in Cleveland.  He was on the Alliance City Hospital Board of Directors, served the hospital as Chief of Medicine and was a 30 year member of the Stark County Medical Association, serving a term as president.  He was a Rotary member and named a Paul Harris Fellow.  Dr. Baker served as President and board member of the Visiting Nurse Association of Alliance and served the YMCA as a board member.  He passed away in 2000.

Mary Lou Belcher Baker graduated as a registered nurse from Frances Payne Bolton School of Nursing in 1947 and was a member of the U.S. Public Health Cadet Nursing Corps.  She volunteered her time at the Alliance Community Blood Bank and preschool clinics, served on the High School Now Committee which helped establish AHS at its current location, and often substituted as the AHS clinic nurse.  Mary Lou was a member of many philanthropic groups including the Women’s Club, Coterie, Sorosis, Quota Club and Doctor’s Wives Club, holding leadership positions in many of them. She hosted numerous exchange students and, before her death in 2012, was able to reunite with several of them through her international travels.

The Baker children continue to contribute to the original endowment.  It is the family’s hope that their gift will inspire a new generation interested in the advancement of medicine and medical treatment. 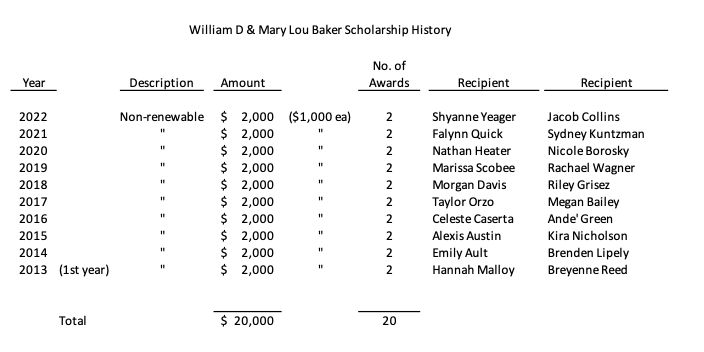