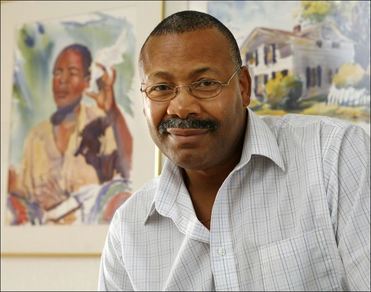 Aaron Bivins attended the University of Toledo and graduated with a Bachelor of Arts degree in Art, along with a teaching certificate.  He started out as a walk-on football player at Toledo in 1974 and was on a scholarship by the end of his freshman season.  By the end of his senior season he had served as a co-captain of the team in 1977; he led the team in tackles in 1976 and 1977; he was the team’s most valuable player in 1976 and 1977; he was all-Mid-American Conference in 1976 and 1977 and Mid-American Conference Defensive Player of the Year in 1976.

Mr. Bivins also excelled in the classroom and was named to the Mid-American Conference All-Academic Team in 1976.  Following graduation, his first art job was as an illustrator at LaSalle’s department store in Toledo drawing appliances.  He then taught art for ten years at McTigue Junior High School in Toledo while working nights for United Parcel Service.  He eventually dropped his teaching position to work as a Health and Safety Supervisor for UPS until his retirement in January of 2011.  But, while working at UPS was his vocation, art has always been his avocation. 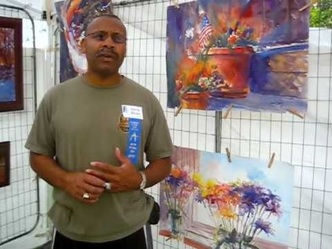 Aaron Bivins at the annual Art on the Mall event on Centennial Mall, University of Toledo. (Source: youtube.com)
Mr. Bivins has held professional memberships in the Ohio Watercolor Society, the Toledo Artists Club and the Northwestern Ohio Watercolor Society, where he served as President.  His major contributions to society include his many watercolor paintings, photographic portraits, and as a demonstrator, juror and instructor of watercolor workshops and classes.

He has won Best of Show and First Place, as well as numerous other awards in northwestern Ohio and was featured in the University of Toledo Alumni Magazine in 2010.  He appears at several art fairs in Toledo every summer and his subjects range from landscapes to homes to portraits.  He paints in acrylics, oil and watercolors, with an emphasis on watercolors. 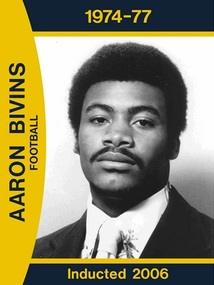 University of Toledo Athletic Hall of Fame (Source: utrockets.com/news)
Mr. Bivens donates some of his artwork to charity and will often do a watercolor painting during an event so people can watch him create something that they would be interested in bidding on for the organization that is sponsoring the event.

He resides with his wife Aronica in Toledo, Ohio and they have three children, Sarah, Shelley and Aaron, and one grandchild with a second one due in December.  Aaron Bivins was nominated by Elayne Dunlap, an Alliance educator.