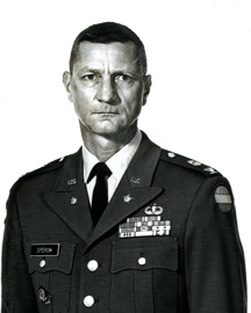 Lt. Col. Charles Conrad. “Chuck” Sperow joined the United States Army in 1951, following his graduation from Mount Union College, and is presently serving at the Pentagon in Washington.  He was originally commissioned to the field artillery through the Officer Candidate School.

As a First Lieutenant, Sperow served in the artillery in the Korean War earning the Bronze Star.  He also was awarded a Purple Heart for wounds that he received in a missile attack in the North Korean Sector on June 18, 1953, just 39 days before the last day of fighting.  He returned to duty on September 2, 1953.

On June 15, 1962, then Captain Sperow graduated from the U.S. Army Command and General Staff College in Ft. Leavenworth, Kansas.  From December 1963 to 1966 he served as assistant military attaché representing the U.S. Army on the staff of the Ambassador to Indonesia.

Lt. Col. Chuck Sperow, ret. with a barracuda that he caught in Florida (source:kingfisherfleet.com)
In Germany, he served as Battalion Commander of the 3rd Battalion, 80th Field Artillery, U.S. Army Europe (USAREUR), earning the Legion of Merit.  Subsequent assignments included Commander of the 1st Battalion, 7th Artillery, 2nd Infantry Division in Vietnam; Group Commander for the 559th Artillery Group, USAREUR, in Italy and a member of the Army General Staff, U.S. Forces Command.  Lt. Col. Sperow is a graduate of the Army War College. 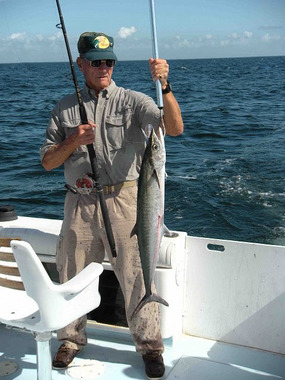 Lt. Col. Chuck Sperow, ret. with a king fish in Florida. (source: kingfisherfleet.com)
He and his wife Mary Ann from Philadelphia have two daughters.

Biographical update: Lt. Col. Sperow is retired from the military and is living in Punta Gorda, Florida.  Mary Ann Sperow, his spouse, passed away on December 18, 2003 at the age of 72.  She is buried in Arlington National Cemetery, Arlington, Virginia.  She is survived by her husband, two daughters and their spouses, and 14 grandchildren and great-grandchildren.