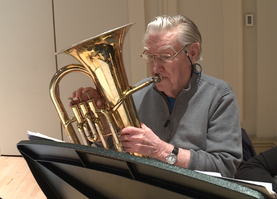 John Weitzel’s tenure as Band Director at Alliance High School established a new standard of excellence, continuing a long tradition that started in 1926 with the first AHS Marching Band. During the Weitzel years (1961 to 1978), the marching band travelled to Buffalo to do the halftime show at several Pro-football games. They performed at Disney World, in Chicago, and were well known as a high school band of renown. Mr. Weitzel taught many lessons in teamwork, coordination, leadership and dedication for all band members as part of his program for developing performances. These lessons have resonated with his pupils long after high school and the goal of this scholarship is to keep that spirit alive.
John Weitzel served in the U S Army during World War II (1943-46). He and his future wife, Dixie Hutson, each earned degrees in music from the College of Wooster in 1949. As undergraduates they co-wrote the Wooster College fight song, “Hail to the Black and Gold.” John went on to earn his Masters in Music Education from Columbia University in New York City in 1950. 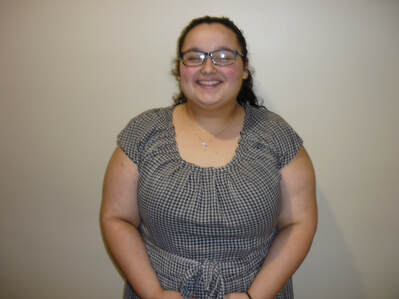 2019 recipient Madison Serrano
Dixie Weitzel, an accomplished pianist, taught music in the Alliance Elementary Schools for many years. In the 1980’s, John and Dixie, performed at various venues, providing live music on the piano and organ and sharing John’s stories of growing up with his ‘best friend’ Henry Mancini, in Aliquippa, Pennsylvania, and their continued connections throughout life. He even published a book, ‘My Friend, Henry Mancini.’ In 2017, Mr. Weitzel is still going strong. He created a well received program that he takes to retirement homes, service clubs and church groups, performing on his baritone horn and retelling his stories. At age 93, he continues his love of music playing in local musical groups in Grand Rapids, Michigan.

The “Days of Glory” scholarship committee has established this scholarship in honor of John Weitzel, to be awarded annually to AHS seniors to assist in their continuing education. The goal is to select a student who exhibits academic potential and reflects the values instilled by Mr. Weitzel.

The AHS Foundation is honored to accept the administration of this Scholarship Fund.