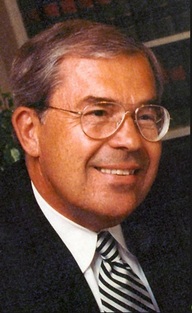 A 1956 graduate of Alliance High School, John Douglas Liber was a football standout for both the Aviators and the Purdue Boilermakers before a serious back injury ended his athletic career.  He received his Bachelor of Science degree from Purdue in 1960 and his Law degree from the Ohio State University in 1963. 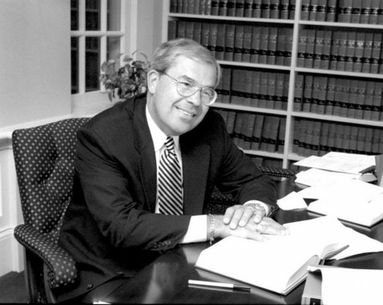 John D. Liber in 1966 (Source: James A. Ross, The Plain Dealer)
Mr. Liber has been honored in publications and journals as one of “Ohio’s Winningest Trial Lawyers” and “The Best Lawyers in the U.S.”  From 1989 through 1995 he has been listed by Harvard Publication among “The Best Lawyers in America”.  In 1985, Mr. Liber was one of a select group of trial lawyers named in a nationwide survey in Town and Country magazine as the ‘Best Lawyers in the United States’.  He was also featured in the October 1991 issue of Ohio Law Reporter as one of ‘Ohio’s Winningest Trial Lawyers’.

One of his most memorable legacies was his creation of the “Education Initiative” which brought members of the Cleveland Bar Association into the Cleveland Public Schools to teach “Street Law”.  He has lectured extensively in the United States and Canada, and is an active member of numerous church and community groups.

Mr. Liber married the former Nancy Berger of Waukegan, Illinois in 1959.  They have three children and six grandchildren.
Biographical update:  Upon retiring, Mr. Liber and Nancy moved to Naples, Florida in 2006, making their home at The Wilderness Country Club where he served a two year term as president.  John and Nancy enjoyed traveling, particularly trips to Lake Como, Italy to visit his sister, Judith Liber ’57 and her husband Zvika Litvak.  Judith is also an AHS Distinguished Alum inducted in 2014.