Francis G. “Buck” Rodgers, president of IBM’s Data Processing Division, joined the company in Cleveland in 1950.  In 1957, following various marketing assignments, he was named administrative assistant to the executive vice president of IBM.  Two years later he returned to the marketing force as a branch manager.  Subsequently he became manager of banking and finance for the division.  In 1962 he was appointed vice president and western region manager and was named president in October 1967.

Mr. Rogers played football, basketball and baseball for Alliance High School.  Following graduation he enlisted in the U.S. Air Force and when the war ended he enrolled at Miami University at Oxford, where he played football for Woody Hayes.  Following his graduation in 1950 he went to work for IBM.  He and his wife and three children reside in Darien, Conn. 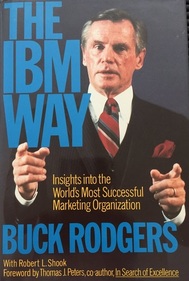 The IBM Way by Francis "Buck Rogers, HarperCollins 1986 (Source: amazon.com)
​Biographical update: After becoming IBM’s vice-president of marketing, Mr. Rodgers retired from IBM in 1984 to become a motivational speaker and author.  He was one of the most sought after speakers in the country and wrote numerous best-selling books on sales and self-improvement, the first of which was titled The IBM Way.  He has received numerous awards including an honorary degree from Mount Union College in 1974.  In 2006 he was inducted into the AHS Athletic Hall of Fame.

Francis “Buck” Rodgers passed away on July 1, 2014 at the age of 87.  He was preceded in death by his spouse of 62 years, Helen L. Rodgers and a daughter-in-law.  He is survived by three children, seven grandchildren and one great-grandchild.  He is buried with his spouse in Grove Cemetery in Darien, Conn. (source: darientimes.com)