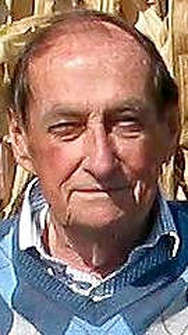 Dr. Berlin graduated from Mount Union College with a B.A. degree in 1950 after serving three years of service in the U.S. Army in Europe during World War II.  By 1955 he had earned his M.A. and Ph.D. degrees in history from the University of Indiana.

Dr. Berlin married the former Carolyn Buchman of Lafayette, Indiana on June 27, 1948 and they went on to have four children.

From 1955 to 1959 Dr. Berlin taught History and Social Studies at Bridgewater College and Wittenberg University.  In 1959 he entered the State Department Foreign Services as a career diplomat.  Over the next 26 years he served in Italy, Trinidad, Argentina, Chile, Brazil, England, Mexico and Washington D.C.  While stationed in Washington D.C., Dr. Berlin held a senior commercial position in the Departments of State and Commerce and supervised programs in 65 countries. 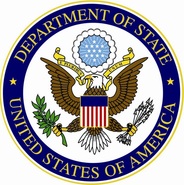 Seal of the U. S. Department of State, Dr. Calvin Berlin's employer for 26 years. (Source: state.gov)
​In 1985 Dr. Berlin retired as a Career Minister and was the only officer in the U. S. Foreign Commercial Service to reach the highest rank of Career Minister.  From 1985 to 1988 he managed trade and investment offices for the State of Indiana in London and Amsterdam.

Dr. Berlin is currently the assistant to the Dean for International Programs at the College of Business, Ball State University in Muncie, Indiana.

Sagamore of the Wabash lapel pin (Source: commons.wikimedia.org)
Biographical update: Dr. Berlin continued at Ball State University for three years and also worked as a trade consultant for American Electric Power for eight years.  He was the recipient of the Sagamore of the Wabash, awarded by the Governor of the state of Indiana.  Among those who have received the award are presidents, astronauts, ambassadors, artists, musicians, politicians and citizens who have contributed greatly to the Hoosier heritage.  He was also a former member of American Legion Post 1 in Paris, France.

Dr. Calvin Berlin passed away on October 15, 2011 in his home at the age of 86.  His spouse, Carolyn, passed away on May 7, 2014 at the age of 87.  They are survived by their four children, Anne (Lawrence) Painter of Lafayette, IN., Robert Berlin of Atlanta, GA., Marilyn Berlin of Indianapolis, IN., Cynthia Berlin of La Crosse, WI., eight grandchildren and three great-granddaughters.  They are buried together in Alliance City Cemetery.