2019 recipient Stefan Thalacker
F. Kermit and Helen Scott Donaldson ’18 were born in Alliance and graduated from Alliance High School as did their sons Fred ’42, George ‘48 and daughter Joanne ‘46.  In 2002, Joanne Donaldson Corey and George A. Donaldson donated $20,000 to the AHS Foundation for the establishment of a music scholarship in memory of their parents, Kermit and Helen.  The scholarship, per their request, will be distributed annually at the discretion of the AHS Foundation Scholarship Committee to a senior(s) who best deserves additional funds for the pursuit of the study of music as a performer or as an educator.  The following information was attached to the donations from the Donaldson children about their parents Kermit and Helen:
​
They instilled in their children a lasting appreciation for music.  Mr. Donaldson played several instruments including the bassoon, saxophone, clarinet, banjo, mandolin and piano.  During the 20’s and 30’s, he played the mandolin, saxophone and clarinet in a dance band called “Madelyn’s Merry Melody Makers”.  He played the bassoon regularly in the Canton Symphony Orchestra and was a guest bassoonist in several  other orchestras.

In 1946 he wrote the music and lyrics for “The Steel Foundry Blues” which he performed many times for The Steel Foundry Society of America, an organization he headed as executive vice president.  During 1947 and 1948 he composed and orchestrated a classical piece, “Piano Concerto in A-flat major”.

Mrs. Donaldson played the piano. She also provided good listening in the home and at concerts and opportunities for music lessons for her children. 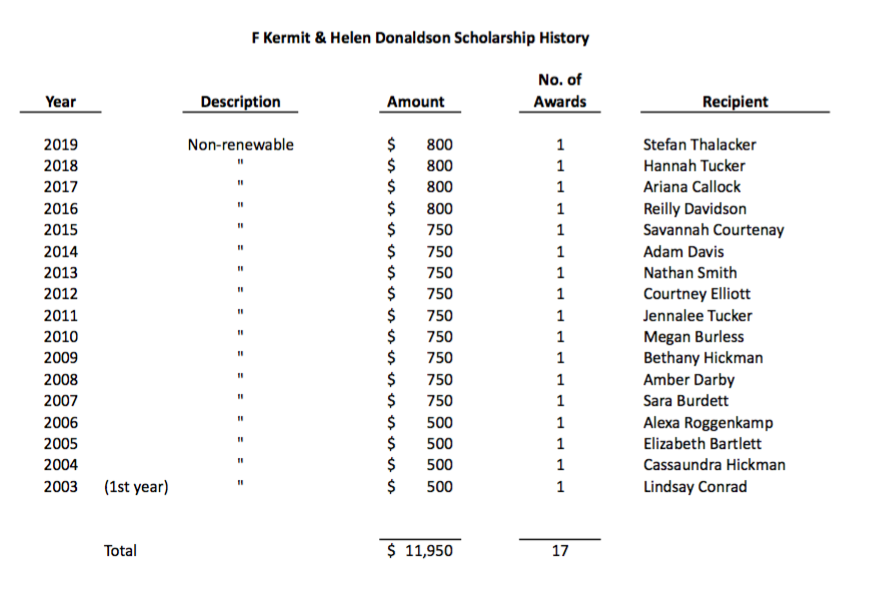